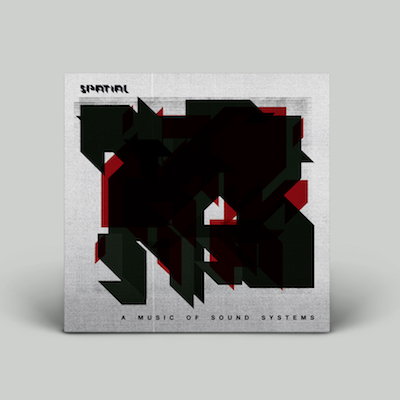 ‘A Music of Sound Systems’ expands on and deconstructs the algo-riddimic approach of Spatial’s classy Emergence series circa 2015-16, bringing forth a long overdue debut album steeped in meticulous attention to aesthetic detail.

Clearly paying dues to JA and UK system culture, Spatial also seeks out the artistic abstraction of El Lissitzky, a key figure in the geometrically-inclined Suprematism movement in early 20th Century Russia. He conflates concepts explored through musique concrète and the Darmstadt School, reducing their ideas down into a gloopy, amorphous whole that craftily creeps under your skin.

Implementing stereo panning to grant his music a tactile, structural quality, Spatial’s experiments have dub at their very root but he’s always looking to draw you in from different directions.

Each track here is like its own little microcosmic universe created by Spatial, whether it’s the chasmic void of sub bass and unsettling ripples of opener Doping Conductor or the deep Lissitzkian bleep abstraction of Proun. The latter is one of several extended productions where Spatial utilises the duration to really build a sense of escalating drama.

Oh my god: this is some of the filthiest electronic music that has ever touched my ears. The synthesizers and bass get jagged and murky unlike anything I’ve ever heard before. The closest combination I can think of to represent this abomination is if The Haxan Cloak and Autechre combined forces with Sunn O))) to make some disgusting music. This album has done everything an album should do: take source material and abstract it beyond the limits of that same material. It has woven a completely new fabric!

UK’s Spatial presents his debut album, A Music of Sound Systems, out on his own label, Infrasonic. Following on from his 3-part Emergence Series in 2015 – 2016, the album takes key concepts from previous work, but deconstructs them, creating a stark, experimental sound. Influenced by dub, dubstep and sound system science, A music of Sound Systems has snippets of roots and Caribbean culture – shown clearly in ‘Quiddity Dub’. Sharper, techier sounds in ‘291 Anu’ and whistling ambience in ‘Walking off’ paint a picture of grey, anxious urban space. An album of experimental explorations with a truly personal feel.