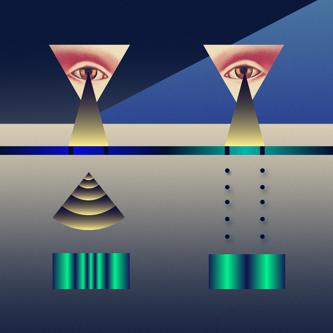 Spatial steps out on Jimmy Edgar’s Ultramajic label with a diverse, unique set of garage-techno and house trax. ‘Circlon’ sets a vibe with a tricksy, off-kilter techno groove fluffed with airy blips and mesmerising vocal idents, and ‘Eloptic Energy’ works up a carnival-ready techno stepper with ever-evolving bassline and lean acid offset by angelic coos. ‘Recover’ is the ruggedest, riding with soggy bass slap, scrambled drums and dancing chords reminding of old Boogizm styles, and the super-crafty ‘Sufani’ comes to wreck-a-body with the niftiest, shoulder-dropping syncopations.

Matt Spendlove aka Spatial pushes house music to its outer limits and back for this release on Jimmy Edgar’s label. The title track is probably the most conventional arrangement, a stripped back groove that gradually builds to reveal kooky vocals and pulsing blips and bleeps. “Eloptic Energy” sounds like Spendlove has immersed himself in dub reggae. Leaning heavily on the reverb, the arrangement is full of plaintive vocals and underscored by solid beats and snappy percussion. “Sufani” veers towards dubstep, its stepping rhythm and horror stabs recalling a time before the bass-techno alliance. Finally, there’s the oddball “Recover”. Here, Spendlove deploys a stepping rhythm, but it’s the backdrop to a compelling hook that sounds like Jeff Mills’ “Changes of Life” on downers.

Ultramajic — the eccentric dance imprint started by Ravenclaw headmaster Jimmy Edgar — has announced its 10th release, which will be helmed by London-based producer Spatial. How special! The UK artist not only started his own Infrasonics label back in 2008, releasing innovative work from the likes of xxxy and Gon, but he also crafted a “performance-based audio/video project” called “Primitives”.

Now, on the four-track Circlon EP, Spatial ventures into the stranger end of the house spectrum, with the title cut’s clipped vocal samples bouncing restlessly around an unyielding kick. “Eloptic Energy” thrives in throwback house mode, with acidic synth licks curling around some massive percussion. On “Recover,” Spatial gets more spastic with the vocal manipulation, all in tandem with the song’s milky stabs. Finally, “Sufani” harnesses gorgeously creepy textures and foreign vox to create an undeniable, hypnotic vibe. Clips from each of Circlon’s four tracks can be found below, and they are pretty special. The EP is out on July 28

Serious techno and tech-house business (my favourite kind of business) courtesy of Londoner Spatial, with his Circlon EP. Jimmy Edgar, who is about to commence his Australian tour, had the pleasure of releasing this deliciously diverse four track piece on his Ultramajic imprint.

The title track kicks things off in weighty fashion as the significance of the bass is helped along by the spacey chords until the 3 minute mark where the withdrawn and echoing vocals help add that extra bite to round off a quality tune. ‘Eloptic Energy’ oozes retro vibes with the Rasta vocals ushering in the acid feel around the minute mark, which is complete with the resonating bass kick and snare. The diverse nature of the EP is clear within the first two tracks, which is then reiterated with ‘Recover’, with the lighter house feel coming to the fore with intent. ‘Sufani’ caps off the release with a more left-field rolling tech-house effort.

An exciting release from Spatial and most definitely a contender for release of the month.

Our favorite record from the Ultramajic catalog to date has arrived. It’s called the Circlon EP, it was made by London bass/techno producer Spatial (who also runs his own imprint, Infrasonics), and we can’t get enough of the title track. See, “Circlon” is the sort of tune that sounds beautiful on its own, and positively devastating in a mix. It’s easy to imagine the rounded, sparkling notes at the beginning of the track creeping into an intense techno cut and sweeping away the dark vibes with a bit of fuzzy low end, the way Oneman mixes Joy Orbison’s “Ellipsis” out of Claude VonStroke’s remix of “Wut” by Girl Unit on his Fabriclive mix. This is the kind of track unforgettable mixes are made of—and if you want an example of the track in action, revisit the mix fellow Ultramajic alumnus Aden sent us a few months back.

Matt Spendlove has spent a few years at the fringes of house music, dropping garage-influenced beats on his label, Infrasonics, and exploring more unconventional zones on others. Every once in a while he has a surge in output, and July 2014 was his latest, with a 12-inch of frazzled atmospherics on Broken20 and this more conventional dance EP on Jimmy Edgar’s Ultramajic. Spendlove’s precise approach to percussion and arrangement fits with Edgar’s recent turn towards techno, and Circlon might just be Spatial’s best EP yet.

There’s a chief difference between Spatial and Edgar. Where the latter’s tracks are bare and functional, Spendlove’s change every few bars, gradually transforming over their runtimes. “Circlon” pivots around a sonar-ping synth riff and a stuttering bassline that rises and falls like it’s threatening to rip right through the tune. Throw in the clipped vocal sample and it feels ready to blow at any second. “Eloptic Energy” turns down the tension, a slice of muscle-bound house with a cheeky piano breakdown.

Hearkening back to the playful skip of Infrasonics, “Recover” is the most recognizably Spatial tune. Simple and deadly, its taut chord sequence gets plenty of mileage out of just a few notes. The jaunty “Sufani” rounds things off with a happy-go-lucky melody, adding a lighthearted hint to a record that otherwise feels like it was meticulously built for maximum dance floor impact.