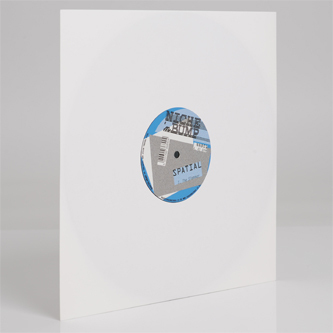 Niche ‘n Bump carves out it’s place in the London sound with three specials from Spatial. The label’s closely affiliated with the much-loved Wifey club events and strongly represents their tastes for all things fresh, funky and immediate with a blend of frisky garage, up-to-the-minute tech and a timeless disco burn echoing everything from FWD to Colin Dale on Kiss and the legendary Lost nights. Big ‘un ’The Slammer’ comes off like Jeremy Sylvester meets Shed at his fruitiest, while ‘Book Down Way Round’ gets craftier with body-carving bass swerve, percolated drums and sweetest vocal beside the duppied techno swing of ‘Plastic Relic’. Killah start, can’t wait to hear this label goes next.

Spatial cut his teeth on his own Infrasonics imprint between 2008 and 2010, outlining a singular take on the dubstep-techno hybrid experiments of the time. His weapons of choice—vocal cutups, clipped xylophones and a restless shuffle culled from garage; frosty chords and terse atmospheres borrowed from techno—made for a spartan mix but also a playful one. That aesthetic has made a somewhat awkward transition to slower tempos in recent years. It’s not simply that Berlin-inflected minimalism is out of step with the current underground; rather, confronted with the added space and heft of slower BPMs, Spatial’s productions can tend to sound slightly anaemic, their garagey tics suffering from a frustrating lack of flow.

With this EP for new London imprint Niche N Bump, it’s fair to say that our man has finally cracked the formula. These tracks retain many of the producer’s trademarks—metallic Berlin chords, Steve Gurley-esque snare licks—but bring a newfound ruggedness to the table. “Book Down Way Round” is the anthem, an addictive number which, in its pairing of functionalist bump with glossy pop vocal recalls garage—in spirit if not in flesh. “The Slammer” supplies a neat description of the kick drum that pins the thing down, a distorted slab of pressure equal parts sleazy and screwface-inducing. Finally, “Plastic Relic” warrants a Shed comparison. The brisk, technoid 2-step rhythm has a tense dynamism to it, while the heavily processed dub breakdown dropped over the top supplies the requisite halftime weightlessness.

Niche ’N’ Bump is a new label from London, started by one of the crew behind the Wifey club nights. Their stated aim is to make records that DJs will play forever, not just a few weeks, and they’re taking an emphatic step towards that goal with an inaugural release by the timeless Spatial. The record begins a new phase for Spatial, where intuition and chance take over, with whirlpools of echo sucking in disco vocals and reggae samples. Between 2008 and 2010 Spatial produced four EPs for his own label Infrasonics, which were collected on CD in 2011. Since then he’s released through Well Rounded, Stillcold and Schmorgasbord. He calls his music “echoes of haunted dancehalls and distant raves.” This record glows with background radiation from The Slammer in Gravesend, Colin Dale on Kiss, The Four Aces in Dalston, Lost and FWD, as if voices from worn tapes are bleeding into the mix. But far from being an echo of the past this is music from right now: an upgraded kind of techno shaken up by subsonic vibrations, reshuffled beats and new ideas. Extensive DJ support already from Ben UFO, Dave Q, XXXY, Colin Dale, Appleblim, Machinedrum, Tessela, Grievous Angel, Swing Ting and West Norwood Cassette Library.

Spatial’s mission to explode the conventions of the dubstep and bass scenes from which he emerged continues in fine style with this new house-orientated three-tracker. Sure there are traces of dub and glitchy darkness in “Plastic Relic” but beyond that, there is a real evidence of a more dancefloor-orientated agenda from the Infrasonic boss. “Book Down Way Round” is a relentless anthem with a female mantra delivered over a Paul Woolford-style techno-funk backdrop. However, the title track isn’t called “The Slammer” for nothing, it’s a heavy slice of the raw, garage-flecked, pumpin’ house that hasn’t been heard much since New York’s Limelight circa 1994!

Raw, jackin and full of punch.

Niche & Bump as a name is pretty indicative and it doesn’t take a trained mathematician to correlate just how a release on the label might sound. The duty of defining it falls to Spatial who lays down three skeletally swung productions in his typically skewed style for the imprint’s debut release. Primed for DJs, with kick-drums coming hard compressed, it’s not an overly emphatic statement; aimed at the niche that will undoubtedly feel out the bump.